Hooray, you’ve survived Christmas! Included in my stocking this year was a bottle of Zip Dry paper glue. My mother knows me so well.

This Asian Black Bear didn’t turn out quite like I wanted. The pieces didn’t line up right during the assembly process, and it was impossible to change them by the time I realized things were wrong. Enter the markers!
Here are the “before coloring” pictures. 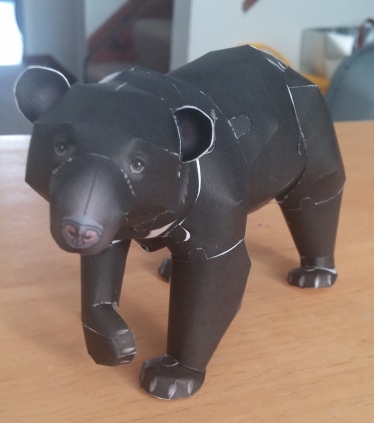 Technically, many papercraft sites advise coloring the edges of your pieces before folding and assembly, not after. I only realized this later, so it’s a post-assembly colorization for this bear.

Not my best work, but it’s not bad all things considered. The pieces are smaller than those I have worked with to date, and curved pieces are generally tougher to get close than flat ones. This has many pieces that needed to fit together exactly, so having them be less than perfect is understandable. Still, I hope the next will be a bit cleaner.

The bear was made with 24lb (90 gsm) Staples brand paper. The model is available here (site is in Japanese): http://www.mitsui.com/jp/ja/morikids/zukou/04.html

I’ll be posting on Thursdays regularly. I have enough papercraft posts to have something to show weekly for a couple months, probably much longer. I’m not going to say this really counts as a general “making” blog with mostly pictures of papercraft — there’s not nearly enough electronics, for one thing — but this is my thing for right now. As I work on other projects, I will be sure to sprinkle them in the mix.